Wine Advocate Robert Parker (Dec 2015) – 91-93+ points - A barrel sample of the 2014 Axios shows the vintage’s charming, almost Margaux-like lusciousness. Upfront, ample fruit, a medium to full-bodied mouthfeel, sweet, low tannin and adequate acidity, it will be drinkable early and should keep for 15 or so years (Axios 2014)

Wine Advocate Robert Parker (Dec 2015) – 96 points - The 2013 looks to be the finest Axios since the 2007, 2006, 2002 and 2001, all wines I rated in the mid- to upper-90s. Also 100% Cabernet Sauvignon, this wine has a dense purple color and a beautiful nose of blueberry and blackberry fruit along with some graphite, violets, and background toasty oak. It is slightly higher in alcohol than its siblings at 14.5%. It is a beauty -- multi-layered, textured and full-bodied, with sweet tannin and nicely integrated acidity, wood, alcohol and tannin. Drink it over the next 20-25 years. (Axios 2013)

Wine Advocate Robert Parker (Dec 2015) – 94 points - The 2012 (once again 100% Cabernet Sauvignon, with the same aging regimen) is a sexy, dramatic, ostentatious style of Cabernet Sauvignon, with loads of ripe blackberry and blackcurrant fruit, some licorice, graphite and forest floor. It is full-bodied, opulent and sexy. Interestingly, I would have thought the natural alcohol was higher than the 2011, but they were both analyzed and found to have identical alcohol levels of 14.4%. Nevertheless, production in this vintage was average for Axios at just under 500 cases of wine. (Axios 2012)

Wine Advocate Robert Parker (Dec 2015) – 92 points – The current releases include his 2011, a much-maligned vintage in Napa, where he only made 194 cases, less than half of what he normally produces, so that he could get the best material into this wine. This is a delicious, fruit-forward Cabernet Sauvignon, showing blackcurrants and blackberries as well as hints of vanillin and cedarwood. It is dense ruby/purple, medium to full-bodied, velvety textured and evolved. It was aged in 66% new French oak prior to being bottled unfiltered. This wine is a beauty from this vintage, and should be drunk now and over the next decade. (Axios 2011)

Wine Advocate (Oct 2014) – 92 points – “This late-released 2010 Cabernet Sauvignon reveals the structure and tannin of this vintage, which is more noticeable than in either 2012 or 2013. Plenty of blue and black fruits are present in this medium to full-bodied, pure, nicely textured Cabernet. Drink it over the next 15-20 years.” (Axios 2010)

Critics Challenge International Wine Competition (June 2015) – 97 points, Platinum   ** #1 Bordeaux Varietal & #2 Overall of 1400 wines tasted ** - Now with some significant bottle age, the 2009 Axios is showing complexity that only comes with time, including an evolved floral and earth note in the bouquet. This wine is beautifully structured, with sweet black-fruit aromas, fine tannins and exceptional persistence on the finish. Platinum award winner at the 2015 Critics Challenge International Wine Competition.  95 Robert Whitley May 26, 2015 (Axios 2009)

Wine & Spirits (April 2013) -  91 points - “This blend, made by Robert Egelhoff, emphasizes mountain fruit (a portion of the blend comes from Bianchini Vineyard, steep terrain on Atlas Peak) in foresty scents of conifer and deep, umami tannins. The wine’s structure is tight and firm enough to hold all the heady fruit, focusing it through a lasting flavor of smoke and porcini. Decant it for a steak” (Axios 2009)

Wine & Spirits (Feb 2015) – 91 points – “Richness is all in this supple, plummy cabernet. A wine that has matured toward soft, supple tannins.  The flavor is not distinctive or detailed, but the texture is fine and soothing.  A red to pour with grilled lamb chops.” (Axios 2008)

Wine Advocate (Dec 2009) - 95+ points - "The brilliant 2007 Axios has an opaque purple color, a beautiful, sweet mulberry, black cherry, and cassis nose, and hints of crushed rock, flowers, and licorice, with subtle background oak.  With its superb opulence, layered mouthfeel, and seemless finish, this could well turn out to be even better the the 2005, but it is still a youngster and unevolved, even compared to the 2005.  It should last for 20 years." (Axios 2007)

Wine Advocate Robert Parker (Dec 2009) - 95 points - “An example is certainly the 2005 Axios. One-hundred percent Cabernet Sauvignon, this wine is concentrated, still young, but with terrific density, richness, and concentration, although still playing it close to the vest. Opaque purple in color, with plenty of creme de cassis, licorice, and subtle smoke and earth, the wine is full-bodied, beautifully pure and layered, but one can sense that most of the nuances and complexity have still not emerged. This wine is locked and loaded, as they say, and 2-3 more years of bottle age will be enormously beneficial for it. It should drink well for two decades. A brilliant success in the vintage." (Axios 2005)

Washington Post (Feb 2002) - "The 1999 Axios is superb, intense and firm, with tender cassis and black cherry flavors. Of today's cult wines, it reminds me the most of Harlan Estate, in that it combines powerful fruit with a silky ,smooth-feel making it almost irresistible to drink now, even though a wine this superior deserves to be cellared." (Axios 1999) 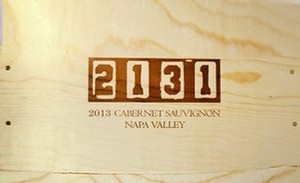 Wine Enthusiast (May 2019) - 93 points - "Made to honor baseball player Cal Ripken Jr.'s 2131st consecutive game played, this 100% varietal red is grippy in flavors of coconut and black cherry, with a structured, complex and robust palate. It has richness within balanced tannin and oak, finishing with a wealth of black licorice and earth."  Virginie Boone (2131 Cabernet Sauvignon 2013)

Wine Advocate (Dec 2009) - 90 points - “The 2008 Sauvignon Blanc Five Clones is a sort of hybrid blend of New Zealand combined with a Loire Valley style of Sauvignon. Crisp, fresh lemon grass notes intermixed with melon, fig, and spice builds incrementally in the mouth. It is fresh and medium-bodied, with loads of fruit.” Robert Parker (Worthy Five Clones 2008)

Washington Post - "No the price is not a misprint!  Had I been served this wine blind, I'd have pegged it at no less than $60.  Frankly, I doubt there is a Cabernet in the price range that can touch it right now."  Ben Giliberti (Worthy Sophia's Cuvée)

James Suckling (Dec 2016) - 91 points – A big and juicy red showing berry and chocolate character.  Full and juicy with lots of fruit and a long, flavorful finish. Yet this does maintain freshness.  Drink now. (Worthy Sophia’s Cuvee 2013)

Wine Advocate (Dec 2009) - 90 points -  "The 2007 Sophia's Cuvée is a big-time sleeper of the vintage.  An outstanding example of Napa Bordeaux varietals, it displays loads of white chocolate, crème de cassis, licorice, and a touch of subtle smoke in a medium to full-bodied style.  Silky tannins, flesh, and plenty of concentration characterize this wine, which has no hard edges." Robert Parker (Worthy Sophia’s 2007)

Wine Spectator - 93 points, Top 100: 2004, Rank: 42 - Appealing for its exuberant display of ripe, fleshy blackberry and wild berry fruit.  It adds a pretty touch of floral and cedar nuances before revealing its depth, richness and concentration on a long, persistent, impressive finish that keeps the flavors lively and flowing. (Worthy Sophia's Cuvée 2001)

Wine Advocate Robert Parker (Dec 2015) – 90 points - Better, richer, and more expansive and intense than the 2012, the 2013 Cabernet Sauvignon is sourced from a hillside in St. Helena as well as from Atlas Peak. Offering greater complexity and fragrance than the 2012, this wine is an intense red/purple color and possesses loads of blackcurrant, licorice, cedar wood, and underbrush in its aromatics. It is medium to full-bodied, with ripe tannin and a nice, plush, long finish. Drink it over the next 10-15 years. (Kalaris Cabernet Sauvignon 2013)

Wine Enthusiast (March 2013) -  “This boasts citrus fruit, lemongrass and buttercream flavors that are brightened by zesty acidity. It’s clean and complex, and it’s a fine wine to drink with shellfish in rich buttery sauces.” (Kalaris Chardonnay 2011)

Sommelier Challenge International Wine Competition (September 2015) – WINE OF THE YEAR – Best of Show (Red) – 97 points - Platinum (Kalaris Merlot 2013) - A panel of advanced and master sommeliers at the 7th annual Sommelier Challenge International Wine Competition loved this Napa Valley Merlot, and it's easy to see why. With firm structure and richly layers red and black fruits, it could easily pass for a Right Bank Bordeaux. Aromas of plum, blueberry and blackberry dominate this wine that exhibits impressive dimension and weight. The wood note hangs judiciously in the background, lending hints of vanilla and spice. I wouldn't hesitate to lay it down for a decade or longer. 97 Robert Whitley Sep 15, 2015) (Kalaris Merlot 2013)

Wine & Spirits (Feb 2015) – 94 points – “Constantine “Gus” Kalaris, longtime proprietor of the East Coast distributor-importer Constantine Wines, started his Napa-based Axios label in 1999 and launched Kalaris in 2009.  Bob Egelhoff made this wine, working with a leased vineyard in the Petaluma Gap to turn out a subtle, gracious pinot noir with appetite-inducing scents of rose petal and mushroom.  Underneath its savory layers, the tannins show through with a texture that’s as cool and fine as damp sandstone, coastal acidity giving it a bright persistence. Serve it now or in a few years at an autumn feast graced by game birds and plenty of wild mushrooms.” (Kalaris Pinot Noir 2011)

Wine Enthusiast (March 2013) - 90 points – Cellar Selection - “Tannic, dry and acidic now, this doesn’t offer much of the immediate opulence found in many California Pinot Noirs. The richness is in there, but it’s buried. The sweet core of cherries, currants, exotic spices, mushrooms and minerals is just waiting for time to release it.” (Kalaris Pinot Noir 2010)

Wine Advocate (Dec 2012) - 90 points -  “The 2009 Pinot Noir shows the pure pedigree and class of this great Pinot vintage.  Round, vinous and inviting, the 2009 wraps around the palate with juicy dark berries, licorice, mint and sweet spices.  Radiant and expressive, the 2009 stands out for its terrific balance and overall sense of harmony.  A rich, creamy finish rounds things out in style." Antonio Galloni (Kalaris Pinot Noir 2009)

Connoisseurs' Guide to California Wine (Dec 2014) – 91 points -  “Bright, energetic and still fairly nervy with deep and defined fruit leading the way, this vibrant, generously filled youngster displays fine varietal range and hits all of the right marks from melons and citrus to fresh grass and green tea. It is substantial stuff, to be sure, but it is exceptionally well-balanced as well, and, if its enthusiastic endorsement comes with the slight caveat that it be allowed to briefly rest in the cellar, it is a Sauvignon Blanc on track to age famously.” (Kalaris Sauvignon Blanc 2013)

City Peek (Nov 2017) - "Kalaris states, "the spirit of Philotimo is what has kept Greece and America on the right side of history for centuries." And, he has bottles his words with his newest offering.  The AXIOS and Kalaris Family Estates have bottled 800 cases of  2015 Philotimo Cabernet/Xinomavro Blend. Both varietals shine brightly in the glass and delight on the palate. A terrific and epic time for winemaking. Congratulations to Gus Kalaris and Bob Egelhoff." (Philotimo 2015)